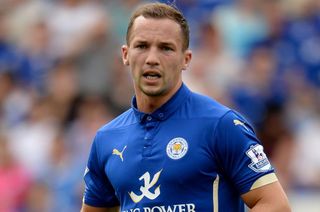 Leicester snatched a 2-2 draw against Everton on Saturday, with Chris Wood's 86th-minute effort earning them a point in their first Premier League match in more than 10 years.

Drinkwater, voted the Championship's Player of the Year last term, only lasted 39 minutes before hobbling off with a hamstring injury.

And he - alongside James, who suffered a knock in training - are set to miss the club's visit to Stamford Bridge this weekend.

It is not all bad news for Leicester, though, with Marc Albrighton and Jamie Vardy closing in on returns.

"Danny's is a grade one [hamstring injury], so he'll be seven to ten days, which is not too bad," Pearson told the club's official website.

"Matty got a heavy knock on his shin and will be a couple of weeks.

"It’s unfortunate that we've picked up one or two injuries, but Marc Albrighton will probably train tomorrow, so will Jamie Vardy, so we lose one and we get one back – it's nothing too drastic."

Drinkwater and James were two mainstays of Leicester's promotion winning side last season, with the former playing in 45 matches as they romped to the Championship title.