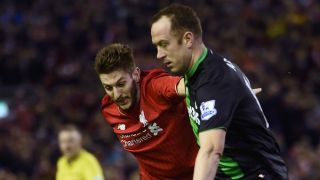 Stoke City midfielder Charlie Adam faces up to six weeks out with a torn calf muscle suffered in the League Cup semi-final second leg against his former club Liverpool at Anfield.

The Scotland international, who had initially come on as a second-half substitute, had to be replaced by Marco van Ginkel during extra-time and left the ground on crutches after Tuesday's match, which saw Stoke lose on penalties.

Manager Mark Hughes initially thought Adam, 30, faced "a few weeks" out, but tests have revealed the damage means he will be sidelined for a more serious spell.

The former Rangers player will be out for five to six weeks and miss Stoke's next seven games if he is unavailable for as long as predicted, with a potential return on March 12 against Southampton.

"Charlie unfortunately had a bad tear to his calf so he will be five to six weeks, which is unfortunate," said Hughes.

"But with Ryan Shawcross it is more positive as he feels a lot better at the moment."

Geoff Cameron also remains unavailable with an ankle injury that is taking longer than expected to heal and Stephen Ireland is now likely to be handed a run in the side.

"People like Stevie will come into my thoughts, in particular when Charlie and Geoff are out," said Hughes.

Adam has played in 17 of Stoke's 23 Premier League matches this season.