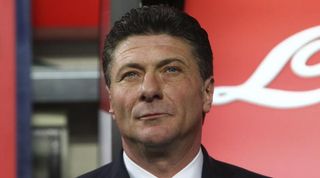 The visitors required a first-half penalty save from Samir Handanovic to keep them from falling to defeat in Turin, having not been beaten by their hosts since February 1994.

And Mazzarri is convinced that Doveri made the wrong call, leaping to the defence of his new centre-back Nemanja Vidic, who after conceding the spot-kick was later sent off for dissent.

He told Sky Sport Italia: "If you give the first penalty, then you have to give the one on [Inter's Mauro] Icardi too, which was more obviously a foul.

"In fact, the one on [Torino forward Fabio] Quagliarella was absolutely not a penalty, otherwise they'll give dozens every game.

"As for the Vidic red card, the referee lost the plot. Vidic is used to playing in England, where if a fair foul is given, they applaud the referee and say 'you got it right'.

"Here Doveri misunderstood the intention and thought it was malicious. It's absurd."

Mazzarri insisted there were plenty of positives to take from the game, hinting that Torino could be surprise packets in Serie A once again after finishing just three points behind Inter last season.

"It was a balanced and difficult game, which we knew it was going to be, as it's never easy to play in Turin where they sit back and wait for you," he said

"We tried to win right to the end, but didn't take our chances. Overall we played well and it'll be tough for everyone here."

The former Napoli boss was particularly impressed by the performance of debutant Pablo Daniel Osvaldo, who put in a lively performance after coming off the bench in the second half.

Mazzarri said: "I had wanted to start Osvaldo, but he wasn't in good shape and I asked if he could play 30 minutes. We really could've done with [Rodrigo] Palacio today, too."