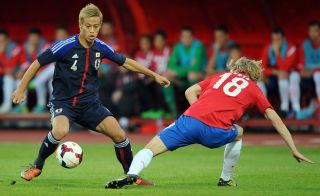 Alberto Zaccheroni's men failed to score for the first time in nine matches in their 2-0 defeat at the hands of Serbia in Novi Sad.

The Italian, who has already led his team to the World Cup, played a relatively strong side, including Keisuke Honda and Shinji Kagawa.

Cerezo Osaka striker Yoichiro Kakitani started as the lone man up front but struggled against a strong Serbia defence.

"I couldn't do anything," Kakitani said.

The partnership between Matija Nastasic and Nenad Tomovic led to a change of plans for Japan as they tried to create chances from wide areas.

"The middle of their defence was solid, so Keisuke and I talked about attacking from the wings," he said.

"But they put a lot of players on the sides and we weren't able to get anything going."

Despite the loss, Japan should have too much firepower for a Belarus side who have struggled to get going.

Georgi Kondratiev's men have at least troubled powerhouses France and Spain in their most recent World Cup qualifiers.

Belarus cannot qualify for Brazil 2014, but pushed France in a 4-2 loss in September before going down 2-1 to Spain on Friday.

Krylia Sovetov Samara striker Sergei Kornilenko, who scored against Spain, shapes as the most dangerous threat to Japan's chances of winning.

The 30-year-old has scored 14 international goals, but he may be starved of opportunities against Japan.