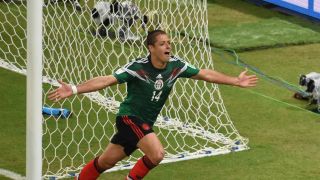 Hernandez has played just 63 minutes across 13 La Liga matches in 2015, while the Mexican striker has not started for Real since scoring once and setting up two other goals in a 5-0 demolition of Levante on October 18.

But despite his tough season on loan from Manchester United in Spain, Hernandez insists he remains motivated, while he is hoping for more opportunities in Mexico's friendlies against Ecuador and Paraguay over the next week.

"This is what I'm waiting for - the opportunities to be able to do what I love most in life."

While Hernandez has struggled to get starts at club level over the past few years, the 26-year-old has continued to perform for Mexico and has scored three goals in their last six matches, including against Croatia at Brazil 2014.

"It's been a year with a lot of experiences and unfortunately in the last few years, what I've lacked is opportunities, nothing more," he said.

After being eliminated from the World Cup in the round of 16 by Netherlands, Mexico went on a five-game unbeaten run but lost their last match of 2014 3-2 to Belarus.

With the Copa America beginning in June, coach Miguel Herrera will be looking for a good start to 2015 for Mexico at the Los Angeles Memorial Coliseum on Saturday.

Ecuador had a mixed end to 2014, winning two of their four post-World Cup friendlies but losing to Brazil and drawing with the United States.

Gustavo Quinteros' side are without World Cup star Enner Valencia, who had surgery on his big toe after cutting it on a broken tea cup earlier this month, and Ecuador will have to rely on Espanyol forward Felipe Caicedo against Mexico.