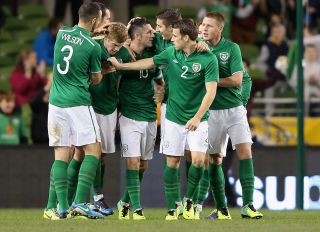 O'Neill and his assistant Roy Keane would have seen plenty of encouraging signs in a dominant display against a poor Latvia side.

Keane scored the first goal of the O'Neill era with a typical poacher's finish from close range and Ireland's all-time leading scorer could easily have helped himself to a hat-trick.

Aiden McGeady made the most of his recall to the starting line-up by scoring a second goal and Shane Long added a third 11 minutes from time as Latvia showed just why they are ranked 117 in the world.

A trip to Poland on Tuesday should give O'Neill a better indication of the task he has on his hands ahead of the UEFA European Championships qualifying campaign.

O'Neill made six changes to the team that beat Kazakhstan last month, with wingers McGeady and James McClean among those to be given a chance from the start.

Latvia coach Marian Pahars, meanwhile, brought in goalkeeper Andris Vanins at the expense of veteran Aleksandrs Kolinko as one of four changes following the draw with Slovakia.

Midfielder James McCarthy could have opened the scoring after just two minutes, with his venomous volley looking destined for the back of the net until it struck John O'Shea in a congested penalty area.

Vanins then escaped a booking when he handled outside the area after 11 minutes and redeemed himself by thwarting Keane after the resulting free-kick was well worked to allow the striker a shot on goal.

Keane was not to be denied 10 minutes later, though, when he struck from close range after McGeady's corner was flicked into his path by McClean.

The LA Galaxy man almost doubled Ireland's lead two minutes later as Latvia defenders backed off, but his measured right-foot strike was palmed away by the agile Vanins.

Ireland continued to enjoy plenty of possession and that elusive second goal finally arrived after 67 minutes when McGeady capitalised on a sloppy pass and beat Sion keeper Vanins at his near post with a right-foot strike from 25 yards out.

And an unmarked Long got on the end of Seamus Coleman's cross to tuck home a third 11 minutes from time with Latvia's defence at sixes and sevens.

Vanins then produced a fine fingertip save to keep out Anthony Stokes' rising shot late on as Ireland secured a comfortable win.