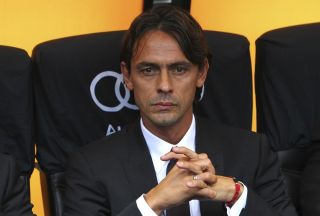 In his first competitive game in charge of the club, Inzaghi watched on at San Siro as the hosts took an early lead through Keisuke Honda.

Goals from Sulley Muntari and Jeremy Menez put Milan in complete control in the second half, before Alex's own goal left nerves jangling slightly in the final quarter of the game, and an even more anxious finish was avoided when debutant goalkeeper Diego Lopez saved Antonio Candreva's penalty in stoppage time.

Inzaghi, who sprinted down the touchline to celebrate with his players after Muntari's strike, believes his side will fight for everything this season.

"These 50 days of training helped us to form a great group," he told Sky Sport Italia.

"I had said we could lose against more talented opponents, but not because they wanted it more than we did.

"It was a perfect game for the first hour, then we suffered a little, but that was only normal in the circumstances. The president [Silvio Berlusconi] was happy with the performance."

It was announced ahead of the game that Milan had completed a two-year loan deal for Chelsea's Fernando Torres, and the Spaniard was in the stands to watch his new side start the new campaign with a victory.

"He will give us a big hand and the opportunity to make the most of counter-attacks," Inzaghi said.

"He had his medical tests today and set a new record for the team.

"What are our objectives? There are perhaps three teams who have something more, but with hunger, temperament and our fans back at San Siro, we could be a surprise."