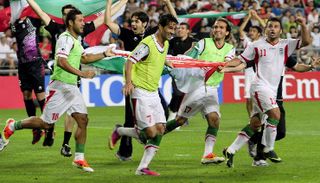 "I feel like God is answering all of our prayers at once," 24-year-old Nasim said by phone from Tehran. "First a new, different president - and now the World Cup. We're beside ourselves with happiness."

Thousands had spilled onto the streets on Saturday night to celebrate the unexpected presidential election victory of Hassan Rohani, a cleric backed by Iranian reformers for his promises to promote less abrasive foreign relations and greater freedom at home.

Many hoped he would bring a relaxation of international sanctions and an upturn in an economy where inflation and unemployment are rampant and productivity is slumping.

"Congratulations to my dear people on the occasion of our qualification for the 2014 FIFA World Cup in Brazil," his media team tweeted. "So proud of our national team!"

Shortly afterwards the 73-year-old Khamenei himself got in on the act, albeit less effusively. His message on state media read: "The football team's victory has made people happy, especially sports fans, happy. I thank those who made this happiness possible."

Impromptu street parties broke out in Tehran and across the country as the news spread, with people dancing, waving flags and honking car horns, the state news agency reported.

State television showed pictures of people in the streets clapping and shouting "Iran! Iran!", and video clips of the celebrations appeared online.

Across the Gulf in Dubai, groups of Iranians gathered to watch the match in bars and restaurants, and roared when Iran took the lead against the run of play.

"We've had bitter days these last eight years. Two victories in one week can give people what they need right now, which is hope," said Hossein, 21, a student.

"After a long time, the people of Iran will have a very sweet week. This win will help to unify people, because the national team belongs to the whole country."

Social networking sites also erupted with joy at the news.

"I think we've all died and we're now in heaven. God bless our souls," read one Facebook posting.