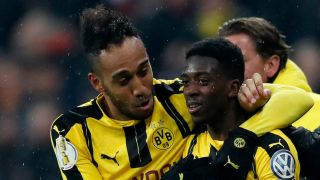 Pierre-Emerick Aubameyang expects Ousmane Dembele to make his mark at Barcelona despite being sidelined by a torn hamstring.

Dembele signed for Barca from Borussia Dortmund in August for an initial €105million, with add-ons potentially taking the deal up to €147m.

But his career at Camp Nou got off to an inauspicious start as he suffered an injury in his first LaLiga start against Getafe on Saturday.

He has since undergone surgery and could be out for up to four months, though the France international has hinted at an earlier return.

Former Dortmund team-mate Aubameyang has faith in the ability of Dembele - who went on strike to force a move to Barca - to make the grade at the Catalan club.

"Everyone was affected by his departure. What I know is they [Barca] had an agreement with the club. If Barca wanted him, they [Dortmund] would not stop him," Aubameyang told RMC.

"He did it a little too early [his strike]. But, he is my friend, I will not slam him. I fully understand. It's his dream.

"It's not going to be easy for him at Barcelona. But he is someone who adapts quickly. It will go well for him, even if it takes time because of injury. I think he's going to bring a lot of things to Barca.

"I spoke with him, and he told me that he would be back in two months."