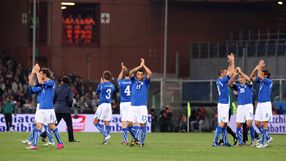 UEFA also ordered the Serbian FA to refrain from ordering tickets for all away matches during the remainder of qualifying.

The October 12 match was abandoned after six minutes when masked Serbian fans smuggled in flares and hurled them on to the pitch and at Italian supporters, stunning a modern European sport which hoped such scenes had been consigned to the past.

"The Control and Disciplinary Body has decided to award the match as a 3-0 forfeit win to Italy," a UEFA statement said before reeling off a host of other sanctions.

Serbia's one-match crowd ban, which is set to take effect for the home qualifier against Northern Ireland on March 25, came with the suspended threat of a second game behind closed doors if any comparable incident occurs in the next two years.

Italy were also hit with a suspended sentence of one game without fans for a period of two years while Serbia were fined 120,000 euros and Italy 100,000 euros.

Serbia will appeal against the 3-0 walkover.

"We are not happy with that part of the UEFA verdict and we will appeal for a replay of the match because we think the only fair decision is to have a winner determined on the playing field," FA president Tomislav Karadzic told Reuters.

"We don't think justice has been done there but as for the other sanctions taken against us, we can't really complain and the measures against Italy are also what we expected."

Pending the appeal, which Karadzic is not optimistic about winning, the verdict put Italy top of Group C with 10 points from four games. Serbia stayed fifth on four points and struggling to qualify for the tournament in Ukraine and Poland.

The ruling also meant Serbia v Italy in October next year will have a crowd and the risk of more trouble could be high.

"We are not worried at all that Serbia v Italy will be played with fans," Italian FA director general Antonello Valentini, who has three days to appeal, told reporters after the hearing at UEFA's headquarters in Nyon, Switzerland.

"As we have underlined, we want to keep a good relationship with the Serbian team, officials and fans."

Serbian supporters hurled flares after climbing a perimeter fence in Genoa and cutting a hole in netting meant to prevent objects being thrown.

The kick-off had already been delayed for 35 minutes due to crowd trouble, which followed Serbia goalkeeper Vladimir Stojkovic pulling out of the game having been threatened by his own fans because of a domestic club dispute.

Away fans, who had made political gestures in the ground and tried to smash a perspex barrier to get into the home end, also clashed with police after the abandonment and there were 17 arrests.

The Serbian Football Association criticised Italian policing and their counterparts admitted there was a breakdown in intelligence between the two nations.