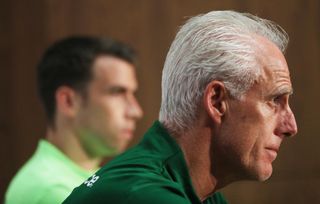 Mick McCarthy will take Euro 2020 qualifying victory over Gibraltar however it comes – as long as it comes.

McCarthy’s Republic of Ireland welcome the Group D minnows to the Aviva Stadium on Monday evening looking to increase their points tally to 10 from their opening four games by repeating the win they achieved over them at the Victoria Stadium in March.

McCarthy and his players will hope for a far more comfortable experience than the one they endured on the Rock, where Jeff Hendrick’s goal secured a scratchy 1-0 win, although the manager brushed aside suggestions that they will be looking to put on a show in Dublin.

He said: “I want to win the game. I don’t get this about how we have to be expansive. We tried that – we were expansive against Georgia and had lots of chances. We scored one, but we won the game.

“We weren’t allowed to be expansive in Gibraltar, but we scored one and won the game. I thought we played well in Denmark and one goal gets us the draw, so long as we win, I’m not bothered.

Friday night’s battling draw in Copenhagen means Ireland will remain at the top of the group if they add another three points to their total, but McCarthy insists their approach will not change.

He said: “You have seen us play over the last three games, you know the style of play we play, so that’s quite evident, how we try to play football, and we will try to do that again.

“But if it ends in a scrappy 1-0 win off somebody’s backside, I am not bothered, I will take the win. You know what I am like.”

Gibraltar arrived in Dublin fresh from a 3-0 defeat in Georgia, but buoyed by the difficulties they caused Ireland on their own pitch.

Midfielder Anthony Bardon said: “I remember four years ago, we lost here 7-0 and lost 4-0 at home.

“We look at how the team has progressed over the last four years and we think we have progressed hugely, especially under a manager who has given us the guidance to perform and want to get better every single day.

“We believe we can give Ireland trouble and get something out of it.”