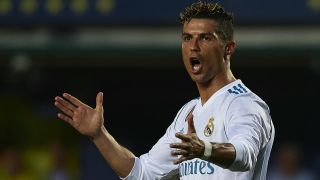 Cristiano Ronaldo suggested he could leave Real Madrid moments after winning the Champions League for a fifth time.

The superstar forward left the headlines to Gareth Bale in Kiev as his team-mate struck twice from the bench to lead Los Blancos to a 3-1 victory over Liverpool.

But, never one to remain out of the spotlight, Ronaldo raised eyebrows in a post-match television interview by revealing he is not assured of remaining at Madrid.

"We will talk in the future. It's been really beautiful to play for Real Madrid. I'll give a response in the coming days," Ronaldo told beIN SPORTS.

"I've enjoyed this moment with my team-mates. The important thing is that we made history. I want to thank all the fans."

When asked to elaborate on his comments, the ex-Manchester United man said he only wanted to savour his latest success and would provide more detail in the near future.

"In the next few days I will give an answer."