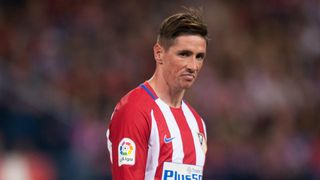 Fernando Torres is keen to sign a new Atletico Madrid contract, with the striker's current deal due to run out at the end of the season.

The 33-year-old has played a bit-part role for much of the campaign, with Diego Simeone typically preferring to pair Antoine Griezmann with Kevin Gameiro.

But although Torres has only scored six LaLiga goals for Atleti this season, the former Spain international is still hoping to extend his second spell at the club.

"Footballers also have problems - we want to advance in our careers and at times we have to take decisions as to where we would like to play," Torres said.

"At the end of the day it's your life, your passion and your job, and you look to find the best conditions for you, for your family... I think all footballers know what I am talking about.

"You fight for the things that matter to you, you fight until your legs have no strength left to realise your dreams.

Thanks for your invitation! It was a spectacular visit! May 19, 2017

"Everyone knows what my wish is. I hope I can continue wearing the Atletico shirt - that's what I want, it's no secret.

"It's up to the club and whether we can agree a deal for a few years, or from year to year, I hope to still be around for another year at least."

Torres could face further competition for selection next season after Alexandre Lacazette indicated a move to Atleti is in the offing during an interview with L'Equipe on Friday.