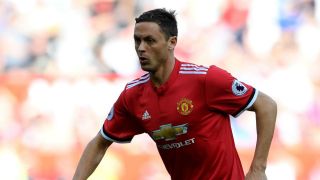 Manchester United boss Jose Mourinho championed Nemanja Matic as one of the best people he has worked with throughout his illustrious career and said the midfielder remained one of his "guys" even after he was sacked by Chelsea.

Matic returned to Chelsea from Benfica in January 2014 during Mourinho's second spell as manager and instantly became a fixture in the team, helping them to the Premier League title in the 2014-15 campaign.

The Serbia international was also a key part of the Chelsea side that won the title again under Antonio Conte last term, making the club's decision to allow him to depart for Old Trafford all the more surprising.

Matic's Stamford Bridge exit allowed him to again link up with Mourinho at United and he has quickly established himself in the first team, with the manager overjoyed at being able to work with a person he holds in the highest regard.

Mourinho told The Times: "Matic, I cannot say that I had better guys than him in my career.

"And he has with me something which marks forever, which was a match where he was on the bench, I play him minute 45 and I took him off minute 70, 75.

"We didn't keep going for a long time because a few weeks later I was sacked, but again he was one of 'my guys', was one of the guys that I kept close [to] during these years even not working together. So I know that the big man is there, even with more maturity."