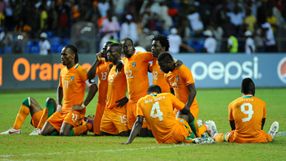 For a fifth successive tournament, Didier Drogba and his team-mates have been tipped for the title, but they have failed in their four previous attempts.

Africa's top-ranked team have not lost a game in regular playing time since a friendly in Poland in late 2010, denied the last Nations Cup title in a penalty shootout defeat by Zambia after not conceding a goal through six games of the tournament.

But for all their consistency, this generation has yet to deliver on its 'golden' promise and with Drogba and other key players probably competing at a last African championship, they will be seeking a strong start.

Togo, not for the first time, have had their preparations disrupted by uncertainty over whether captain Emmanuel Adebayor would be in the side.

Such is his potentially decisive influence that Togo tolerated his decision to join the squad virtually at the last minute.

Traditionally, they teams play a tense and emotive matches.

Both Group C games in Nelspruit on Monday proved dramatic affairs but ended in 1-1 draws, with 10-man Ethiopia holding Zambia and Bukrian Faso scoring with the last kick to deny Nigeria victory.