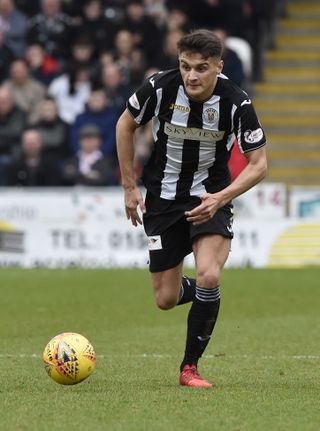 Jack Ross has praised Hibernian owner Ron Gordon for being willing to take “calculated gambles” as they continue to look for transfer openings.

Ross would not comment on Hibernian’s pursuit of Kyle Magennis after St Mirren confirmed they had rejected a “significant offer” for the midfielder.

The Hibs head coach also refused to comment on reports claiming his club were monitoring the situation of Allan Campbell, whose Motherwell contract expires next summer, although he added: “That’s a very obvious one for people to mention because I’m sure he will attract an awful lot of attention.”

Ahead of Monday’s transfer deadline, Ross added: “We could certainly do with one other coming in but we have been really diligent about our recruitment so far and we want to make sure it is someone who can improve us.

“We will keep plugging away until the close of the window and if we don’t then I have a squad that it’s very obvious to say I have been pleased with considering our start to the season.”

Hibs paid Dunfermline for striker Kevin Nisbet in the summer despite cutting jobs elsewhere and are willing to pay another transfer fee amid increasing financial uncertainty in Scottish football.

Ross said: “We have reduced the numbers in the squad and that has enabled us to bring in quality.

“It’s all relative. Loads of other teams sign players and teams have signed a lot more players than us.

“It depends how you add up the total cost of that. If you look at it as a total wage spend as opposed to a fee there might not often be much between it. We have had to be clever in what we have done.

“I am pleased we have been able to go and speculate a bit and that’s where the chairman has been very good. He recognises the importance of taking some calculated risks in how we move the club forward and how we try and create resale value in the future because the club has done successfully in recent times with John McGinn.

“I think it’s a good model but you have to have an ownership that backs that and Ron has done that so far.

“It’s a blueprint that every club tries to follow, not just in Scotland but in other countries.

“A case in point is probably where young Aaron Hickey has moved to in Bologna. They have been hugely successful at recruiting a certain profile of player and moving them at some point in the future and then creating something that is economically viable to continue as a club.

“We feel we are in a good place and that’s the time you should look to strengthen.”

Hibs emerged from their double header against Rangers and Celtic with one point and in third place in the Scottish Premiership and Ross is eager to show they can pick up where they left off when they host Hamilton on Friday night.

“We were pleased we came away with something from the two games because everyone knows, when you play the Old Firm back to back and this season in particular – with how important points are to them every single week – they are two really tough games and they proved to be the case.

“To take something from them meant our momentum wasn’t completely stopped and it’s an opportunity on Friday to hopefully get back to winning games.

“It’s a really, really big one for us, arguably our biggest game of the season, to go into a two-week break from the league in a good place.”