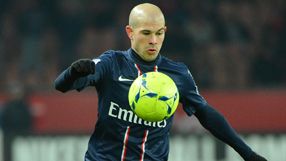 PSG had a three-point lead over second-placed Montpellier at the winter break last season before losing out to the unfancied challengers, who claimed their first French title in May.

Qatari-backed PSG, who host lowly Ajaccio on Friday, head the standings again, albeit on goal difference from Olympique Lyon and Olympique Marseille.

In a poll published in daily Le Parisien on Thursday, 76 percent of Ligue 1 players questioned said PSG would go on and win the title, with 14 percent favouring Lyon.

"We cannot afford another collapse after having been leaders at the winter break," France fullback Jallet told a news conference.

"Last season, we had a rough patch which cost us a lot of points. So we know we can not take anything for granted."

PSG claimed top spot when they defeated Lyon 1-0 at home last month and have won their last four league games.

However, Ajaccio, 16th in the standings with 19 points, are one of the two teams to have denied PSG a goal in the French league so far, holding them to a 0-0 draw in Corsica.

"It was the start of the season and we were struggling collectively. It will be completely different this time... our scoring power is obvious," Jallet said.

Lyon visit strugglers Troyes on Saturday aiming to bounce back after their shock exit at third-tier Epinal in the French Cup last 64 round last weekend.

"We want to move forward after this accident. We are not going to question all that we have done so far and there is no additionnal pressure," midfielder Gueida Fofana, one of the players who missed a penalty in the decisive shootout, said.

Troyes, who have the league's second worst defence with 37 goals conceded in 19 games, are unbeaten in their last three matches in all competitions.

Marseille travel to Sochaux on Sunday seeking another away victory after bagging seven from 10 this season.

Fourth-placed Stade Rennes host seventh-ranked Girondins Bordeaux on Saturday, while champions Montpellier, 11th on 26 points, take on Lorient, who are fifth on 31.