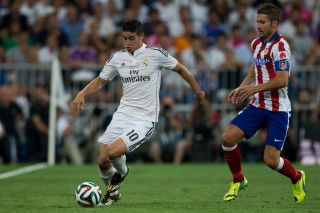 The Colombia international, who arrived from Monaco last month, opened his account for the European champions as they were denied late on in a 1-1 first-leg draw at the Santiago Bernabeu on Tuesday.

Rodriguez applied the finish to a scrappy build-up to open the scoring in the 81st minute, before Raul Garcia tapped home from a Koke corner to give Atletico the advantage on away goals.

And, while revealing his delight at getting off the mark for Real, Rodriguez is determined to score a goal of even greater importance when the sides meet again at the Vicente Calderon on Friday.

"I'm happy because it is a day I had dreamed of," he said. "I scored a goal, but we wanted to win and that wasn't to be.

"The victory was within reach, but now we have to go out to win in the Calderon.

"We have to be patient, look for spaces, pass the ball and try to score there. As a great team we have to go out to win no matter what.

"Hopefully I can score again in the Calderon and try to help my team win there."

Fellow first-leg goalscorer Garcia has his own designs on lifting the trophy, though, and says he and his team-mates fully intend to do so in front of their own fans.

"Another match, at home," he said. "[We're] very eager to play with our fans and win another title that we really want."

The encounter is a repeat of last season's UEFA Champions League final, which Real won 4-1 after extra time.

The sides met five times in all competitions during the 2013-14 campaign, and Real also came out on top when the clubs clashed in the Copa del Rey - running out 5-0 aggregate winners in the semi-finals before beating Barcelona in the final.

However, Atletico had the edge in La Liga, taking four points off Real on their way to winning the title.

Real, who have already lifted the UEFA Super Cup during pre-season, will have concerns over the fitness of Cristiano Ronaldo, who had to be substituted at half-time in the first leg due to a leg injury, but coach Carlo Ancelotti has assured fans that the problem is not serious.

Luka Modric should be involved after putting pen to paper on a new four-year contract on Wednesday.