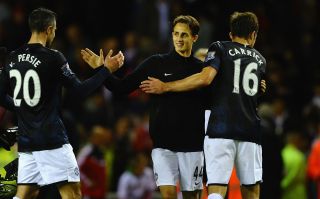 The 18-year-old has made his mark at Old Trafford this season, scoring twice in a 2-1 win at Sunderland in October.

Januzaj was rewarded with a five-year contract and made his UEFA Champions League debut against Shakhtar Donetsk on Tuesday.

And he has set his sights on a long-term stint at the club, telling MUTV: "My first opinion (earlier this year) was to sign for Manchester United.

"It was my first choice and I have signed for them. I am happy here. If I could play all my life at Manchester United, I would do it for the club.

"The boss (David Moyes) gave me a chance and I couldn't have asked for more than to score two goals on my debut.

"I was really happy with those goals. Now I have to continue and score more if I can because I have to prove I can play at first-team level.

"Winning trophies is the only thing I want and to try to be the best player."

Januzaj has primarily been used out wide by Moyes, but believes his best position is just behind the striker – a role he may get to fill in the continued absence of Robin van Persie (thigh).

"My best position will (be) behind the striker as a number 10," he added.

"I always used to play there when I was really young. I can also play on the wings and I always do my best. I would do that even if it was at left-back. It is my job.

"But number 10 is the position I always wanted to play."