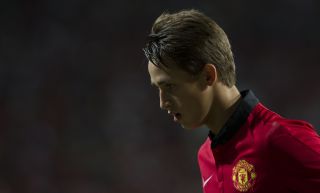 The rise of Januzaj, 18, with Manchester United this season has seen the Belgian-born teenager's international future become a topic of discussion, with the midfielder potentially eligible for five countries.

Januzaj's father, Abedin, has advised his son not to choose a country to represent until his senior club career is settled but a statement by Wilmots, saying he will not 'negotiate' over the teenager's international future, has angered the Kosovar-Albanian family.

"This is shameless," Abedin Januzaj said.

"We never reacted on selections, phone calls or letters from the Belgian FA.

"They are requesting his selection, not us.

"Wilmots' remarks won't make it easier now. We are angry about these comments."

Speaking on Belgian television, Wilmots had bristled when asked whether he would try to sweet talk the Januzaj family to secure their talented son for Brazil 2014.

"It is impossible to negotiate with me," Wilmots told RTBF.

"The boy was born in Belgium, should he say that he wants to play for Belgium – from there, there is no haggling. I'm not going to play that game.

"The kid is available? He wants to play? Then perfect, OK, show me.

"If you're at the top level in Manchester or elsewhere, show me your skills and if I need you I will call.

"I make no promises, to Januzaj or any person."

Through his parents, Januzaj is eligible to represent Albania, Serbia and Kosovo, with the latter still not affiliated with FIFA at senior level.

By birth, Januzaj can play for Belgium, while if he lives in England for three more years, he would satisfy FIFA's residency requirements to define himself as English and play alongside the likes of Wayne Rooney and Jack Wilshere.