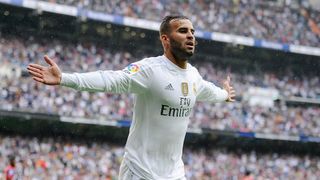 Jese Rodriguez may no longer play for Real Madrid, but he is desperate to boost Los Blancos' LaLiga title ambitions by downing Barcelona on Sunday.

The Spain forward will come up against his former Clasico foes with Las Palmas – where he is on loan from Paris Saint-Germain – on Sunday at the same time as Madrid host Sevilla at the Santiago Bernabeu.

Jese has scored three goals in 14 LaLiga appearances for Las Palmas and the 24-year-old is determined to add to that tally to give Madrid – who are behind Barca courtesy of an inferior head-to-head record, though they have played one game fewer – a helping hand in a thrilling title tussle.

"I would like to score in every game," he told Sportium.

"I would like to score against Barca and give LaLiga to Madrid I will not lie.

"My goal is to play well and help the team."