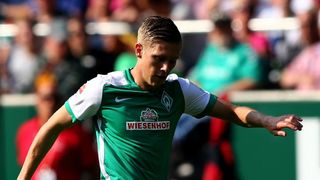 United States international Aron Johannsson is ready to start for Werder Bremen and claims he is looking forward to playing as part of a forward pair in Viktor Skripnik's side.

In Bremen's Bundesliga opener against Schalke, Johannsson came off the bench to replace Levin Oztunali with just over half an hour to play.

But after another couple of training sessions, the 24-year-old, who signed with Bremen on August 5, reckons he is ready for a promotion when coach Skripnik names his starting XI to play Hertha Berlin on Friday.

"Yes, I'm ready," he was quoted as saying by Kicker. "If the coach asks me if I can start, I say yes. Everybody wants to play eventually."

Johannsson added: "I feel in good shape, I have had no problems in training."

The Iceland-raised attacker joined Bremen after two-and-a-half seasons with AZ in the Eredivisie, where he generally played in a forward trio.

Bremen set up in a 4-4-2 diamond formation in their 3-0 loss to Schalke but Johannsson reckons that will suit him more.

"I prefer to play with two forwards and to have another striker by my side," he said.

In 60 Eredivisie appearances, Johannsson scored 29 goals for AZ, while he has hit the back of the net four times in 17 matches for USA.