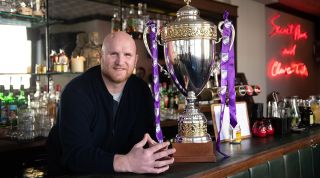 Lennon managed Celtic for four years between 2010 and 2014 and recently returned as interim boss until the end of the season, following Brendan Rodgers’ shock departure to Leicester City.

The 47-year-old has won three and drawn one of his first four games since returning to the club, and goes into Sunday’s home match against Rangers knowing that victory would take the Bhoys another step closer to sealing an eighth consecutive league title.

It would also be Lennon’s eighth Scottish gong as a player and manager at Celtic – he won two in his first spell, and five during his time as a player. Hartson was one of his team-mates for three of those titles, and is convinced that the Northern Irishman should get the job full time.

“Neil has got a big game at the weekend against Rangers, but he’s been over the course before,” Hartson told FFT, speaking at the launch of this year’s BT Pub Cup.

“He’ll want to win the league and win the Scottish Cup as well, to make it difficult for the Celtic hierarchy not to give him the job.”

Simple logistics are one of the key factors for Hartson – Celtic’s season could end on May 25 if they reach the Scottish Cup final, and their Champions League qualifying campaign would begin on July 9 or 10 if they seal the league title.

Celtic had a disappointing summer transfer window last year, with Rodgers left unhappy after the club missed out on key targets.

The Bhoys also currently have five players on loan – Jeremy Toljan, Oliver Burke, Filip Benkovic, Timothy Weah and Daniel Arzani – so a major squad reshuffle could be complicated if a new manager was only brought in mid-summer.

“I think Neil should get the job because there’s a lot to sort out between now and the end of the season,” Hartson explains. “Five players will have to go back on loan at the end of his season, and Neil will have his eye on players to bring in.

“The Champions League qualifiers start in July and the Scottish Cup final is at the end of May, so there’s a quick turnaround. If they got Neil in now, he could have the reins to do all of this stuff in terms of players. That’s why it makes sense.

“Neil will want to win the league and the Scottish Cup to almost say to the board, ‘Well, choose somebody else at your peril now’.”

NOSTALGIA Why everybody absolutely loved FIFA 98: Road to World Cup

Hartson will manage one of the teams in the final of this year’s BT Sport Pub Cup. To enter your team into the competition, go to www.btsportbusiness.com/pubcup. Entries close on Sunday, March 31.