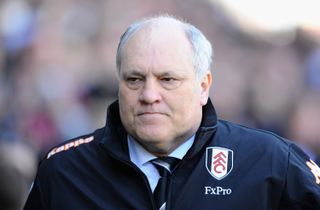 The Dutchman's side were forced to withstand plenty of pressure at the Stadium of Light, but they ultimately made the hosts pay for not taking their chances.

Sunderland had a number of good goalscoring opportunities through striker Jozy Altidore, but the visitors needed only one as Pajtim Kasami headed home from a corner in the second half.

And with a tough opening to the season ahead that sees them take on Arsenal, Newcastle, West Brom and Chelsea in their next four league games, Jol admitted it was the ideal start.

"It was what we needed," he said. "Three points with our schedule is perfect for us.

"At times you would have to say we would have been happy with the draw.

"They pressed us in the first half and we didn't do enough, but in the second half we did better - but I think it's fair to say it was a scrappy win."

The Fulham boss also reserved special praise for midfielder Kasami, who has struggled to nail down a regular place since arriving at the club from Palermo two years ago.

He was sent out on loan to Luzern for a spell last term, and Jol has now called on him to build on his match-winning performance.

"He did well but needs momentum," he added.

"With people coming back from international duty he really stepped up and we came away with a good result."