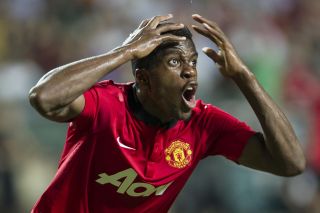 Zaha's only competitive appearance for United since joining the Premier League champions in January came during the FA Community Shield win over Wigan Athletic at the start of August.

The 20-year-old was immediately loaned back to former club Crystal Palace when he signed for United at the start of 2013 and helped the club secure promotion from the Championship via the play-offs.

Another temporary return to Palace or a loan switch to the likes of Fulham has been mooted, but Jol has cooled talk of the versatile forward heading to Craven Cottage.

The Dutchman said: "He did very well actually in pre-season, so there was no reason to make an enquiry about him.