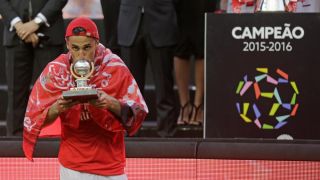 Barcelona have entered talks over signing Benfica striker Jonas, as their search for attacking reinforcements continues.

The 32-year-old enjoyed a stellar 2015-16 campaig, scoring 32 goals in 34 outings to help Benfica to the Primeira Liga title and his performances have seemingly not gone unnoticed in Catalonia.

Barca have also been linked with Atletico Madrid attacker Luciano Vietto as they look to sign a forward to deputise for Lionel Messi, Luis Suarez and Neymar.

"Someone dealing on behalf of Barcelona approached us at the end of last season," Jonas' representative Tiago Goncalves told Globoesporte.

"We were obviously quite flattered, because it was recognition that Jonas had a spectacular season.

"When a club are interested in signing someone, they have to act quickly because negotiations take time to reach their conclusion. A transfer could be difficult because there has not been any contact since the initial approach.

"I want to make it clear that Jonas is very happy at Benfica and feels beloved here. Barcelona's approach is a reward for what he did at Benfica. But a transfer would only be an option if both Benfica and Jonas are happy with it."

Former Valencia striker Jonas has a contract with Benfica until June 2018.