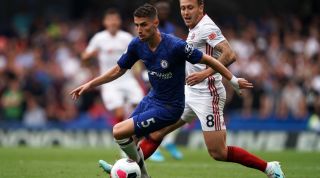 The playmaker scored from the penalty spot as Italy beat Greece 2-0 in Rome on Saturday night to secure Euro 2020 qualification with three games to spare.

Jorginho rose to prominence under Maurizio Sarri’s tutelage at Napoli, and moved to Stamford Bridge alongside the coach in the summer of 2018.

Sarri departed London after just one season to return home and take charge of Juventus, but the midfielder has continued to play a prominent role for Chelsea under new boss Frank Lampard.

When asked after the Greece game about the chances of seeing the 27-year-old in Italian football again, his agent Joao Santos told Radio Sportiva: “Everything is possible in football, there is always the desire to come back.

“With the experience he has earned in the Premier League he could give a big contribution to Serie A.

“He could play in two or three Italian teams that are fighting for the league title.”

Jorginho has come in for some criticism from the Chelsea support during his time at the club, but Santos underlined that the experience of playing in England has benefitted the midfielder.

“It’s been a positive year for him,” he said.

“He always scores from the penalty spot, I’m very happy for him as he works in a very serious way every day.

“Playing with Chelsea is very important, it’s a very intense style of football and he’s learned a lot under Sarri and Lampard.”

Jorginho has started every game of the Premier League season so far under Lampard, scoring one goal.

Chelsea are currently fifth in the standings, two points behind second-placed Manchester City, and face Newcastle United at home on Saturday.

OPTIONS Who can solve Gareth Southgate's centre-back problems for England?