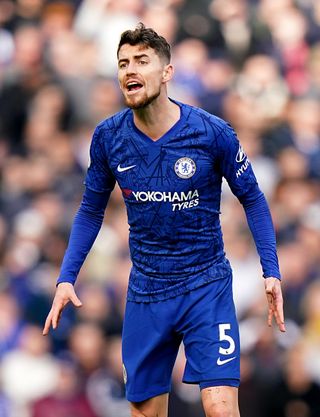 Jorginho has warned Chelsea not to let their demoralising Bayern Munich demolition derail their maiden season under boss Frank Lampard.

The Blues will need a miracle in Munich on March 18 to turn their Champions League last-16 tie on its head, but Italy midfielder Jorginho insists there is no time to sift through the European rubble.

Chelsea have now suffered eight home defeats in a season for the first time since 1986, and will head to Bournemouth for Saturday’s Premier League clash looking to return to winning ways.

Asked if Chelsea must now battle to ensure the Bayern loss does not damage their entire campaign, Jorginho replied: “Yes of course. It is really tough for the changing room, for us, but we have the other competitions and we still have the second leg.

“Anything can happen in football, you never know.

“We just have to believe in ourselves, and not put our heads down. We need to keep working, keep pushing, because we are a good team.

“We need to believe, work hard and be together.”

In-form Lewandowski now boasts 43 goals in 39 matches for club and country this term, but it was his two assists for Gnabry that put Bayern in full control in west London.

Chelsea edged past Bayern on penalties to claim the 2012 Champions League title, but Tuesday’s clash underlined just how times have since changed.

Lampard was an integral playing part of that night of European glory eight years ago, and is now bidding to drive the Blues back to that level from the dugout.

France striker Olivier Giroud toiled away up front to no avail on Tuesday, admitting at times he could only watch on in awe at the levels reached by Hansi Flick’s men.

But the former Arsenal player insisted Chelsea must not give up the ghost, no matter how slender their chances of reaching the quarter-finals are.

“So we have nothing to lose, we’re going to play our game maybe with more freedom. They are a team with a lot of experience. When I was on the pitch I was thinking ‘everything is so smooth’.

“They have played together for a very long time, they have a very good understanding with each other. They played well and you have to recognise this. But you don’t have to keep your head down and we’ve got to bounce back as soon as possible.”

Asked if Lewandowski deserves to be considered in such exalted company, Alaba replied: “Yes I think so. He’s a world-class player and a world-class striker.

“We all know that he can score goals but he showed another side of himself with his assists.

“We know he is very important to us and we are grateful to have him in our squad. He shows it every weekend. He is one of the best and maybe the best striker in the world.

“He scores goals in almost every game and, of course, I think he deserves to be at the top and spoken about with those guys (Messi and Ronaldo).”