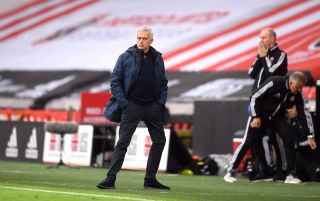 Tottenham head coach Jose Mourinho says he was “destroyed a little bit on the inside” by his side’s lack of fight against Sheffield United on Thursday.

Spurs sunk without a trace after a controversial video assistant referee decision robbed them of a goal as their Champions League hopes were left in tatters after a 3-1 defeat.

They were outplayed and outfought by the Blades and Mourinho, who called his players out on it, was “disturbed” by the performance.

"We had enough time to psychologically react as a team in a different way. We need to be mentally stronger to cope with situations."— Tottenham Hotspur (@SpursOfficial) July 2, 2020

“I believed in the evolution of the team and I thought that by a desire point of view, they put more in than us. That’s something that disturbs me.

“It’s something that I feel, I don’t know, that’s my way of being – it’s something that destroys me a little bit on the inside because I think the last thing in football is when you have the feeling you could, you should do more.

“It’s not a problem for me to cope with mistakes and defeats. It’s a problem when my feeling was we could do much more.”

Spurs have a chance to resurrect their Europa League hopes against Everton on Monday, though Dele Alli is a doubt after picking up a hamstring injury on Saturday.

“Something today in training with Dele Alli,” Mourinho said. “When I say something it’s because I don’t think it’s big and I don’t really know what it is.

“The bad thing about a press conference 48 hours before the game is there’s still a session tomorrow so you will not know what I know, if he is available or not. Apart from that, nothing. Japhet Tanganga we believe training with the team next week. And no [other] problems.

“It’s his (Alli) hamstring. Which is something which he had problems with in the past, in previous seasons, even the beginning of this season, and it’s always something that makes the medical department think.

“We all think it’s nothing important and if you ask me in this moment I would say he’d be available. But I don’t know.”

Tanganga has yet to play since the season restarted due to a stress fracture in his back, but he is expected to start training next week.

Mourinho is wary about him being available in the remaining games, though.

“Too long without playing and an important injury,” he added. “I don’t think so.

“Eventually last match, two weeks to work and be available for the last match, maybe. But to play safe, young guy with a very important injury, probably the best thing for him is to be back for next season.”