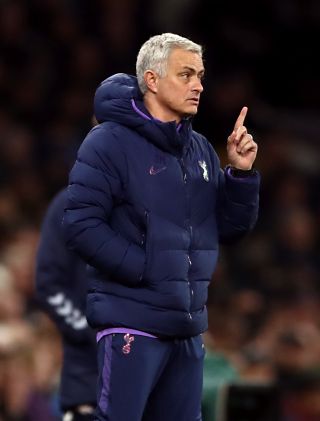 Jose Mourinho has reiterated that Tottenham will not make any knee-jerk signings this January.

Spurs are desperate for a replacement for Harry Kane, who could miss the rest of the season with a hamstring injury, having been left without a recognised striker on their books.

They have been linked with plenty of names so far this month, with Paris St Germain’s Edinson Cavani the latest, but any target has to meet certain criteria.

Mourinho has made it clear that Tottenham’s world will not end at the end of this season and says new signings must be part of the club’s long-term vision.

“To do something, you have to do something that is good for our future too, not just good for tomorrow,” said Mourinho ahead of Wednesday’s home clash with Norwich.

“So I don’t speak about other players from other clubs, about things that can happen or not happen because that’s not me and that’s not the way Tottenham operate too.

“But we are trying to see if any good opportunities arise.”

Tottenham have yet to score in the Premier League since Kane’s injury and while the wait for a new arrival goes on, the hard yards are being put in on the training ground to develop a new style.

“When the games become different then probably the qualities of our players are more adapted to that.

“We did it yesterday, we did it today. We are trying to improve the dynamic of the players playing without a real target man.”

While Kane will not be back any time soon, Spurs will be boosted by the return of Tanguy Ndombele, who has been missing since New Year’s Day with a hip injury.

Mourinho has already voiced plenty of frustration at the club record-buy’s injury problems and the Portuguese has insisted that the determination to become a top player must come from Ndombele.

“We have a plan with him where he is the most important part of the plan,” he said.

“Not me or the sports science or the medical or the nutrition. It’s him, the crucial part of the plan. So we need him to be good in that plan. We put into practice a plan with everything.

“He’s having the nutritionist teaching him things he doesn’t know. We are taking care of him in every detail. But again it is him the key guy.”