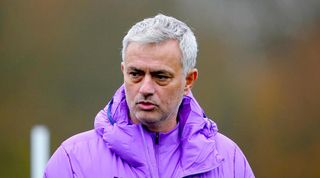 Jose Mourinho says it is "not good for the emotions" for Premier League managers to have access to television screens in the dugout.

A clip of Mourinho protesting a decision during Tottenham's 2-0 victory over Manchester City on Sunday was shared widely on social media.

Raheem Sterling was booked for a strong challenge on Dele Alli in the first half, with the England international arguably fortunate to avoid a red card.

In the mag: Mourinho vs the World! Plus Mané, Mendy, Kovacic, Iniesta, Rio, Baptista, EFL old boys and more

Sterling then went down in an incident involving Hugo Lloris immediately after the Spurs shot-stopper had kept out Ilkay Gundogan's penalty.

Referee Mike Dean opted against awarding a second spot-kick, leading many Tottenham fans to call for Sterling to be shown a second yellow.

A video clip showed Mourinho sprinting to remonstrate with the fourth official after his assistant, Joao Sacramento, reminded him that the Manchester City winger had already been cautioned.

When you find out pre-orders are open for the new FourFourTwo pic.twitter.com/fo9vkk1TPo— FourFourTwo (@FourFourTwo) February 4, 2020

And the Tottenham boss has admitted that he may have gone too far with his protests.

"I think the fact that now it is allowed to have the screen in front of us... I think it's not good for the emotions, for our emotions, because we watch and we watch exactly the same as the VAR is watching, decisions the referees don't see as well as we do.

"That's because the referees, they are on the pitch and, as I was saying the other day, it is 200 miles per hour and very difficult for them, and sometimes they don't see things the same way we do.

"In 2004/05 [at Chelsea], I remember I tried to go with a screen to the bench and I was forbidden by the rules, and in this moment now you are allowed.

"So, I don't think it's good for the emotions. My reaction was just based on being able to watch everything on the screen, so I watched the Dele Alli situation, I watched the penalty, the pretend penalty – I watched everything, so that creates emotions, but okay, I went viral for the wrong reasons."

Spurs face Southampton in an FA Cup fourth round replay on Wednesday.