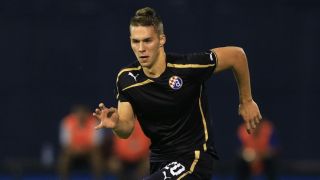 Juventus have completed the signing of Dinamo Zagreb winger Marko Pjaca for €23million.

The 21-year-old featured for Croatia at Euro 2016 and was soon linked with a move to the likes of Inter and AC Milan.

However, Serie A champions Juve emerged as front-runners and the club confirmed on Thursday that Pjaca has penned a five-year-deal.

"Juventus Football Club can today confirm that Marko Pjaca has completed a permanent switch from Dinamo Zagreb for a fee of €23m, to be paid over two financial years," a club statement read.

"The 21-year-old has signed a five-year contract with the club."

Pjaca's move to Juventus Stadium had been expected for some time, with the player himself confirming that Wednesday's Champions League second-round qualifying tie against Vardar would be his last for Dinamo.

During his two-year-stay at Dinamo, Pjaca won the league title and Croatian Football Cup in the 2014-15 season.

Juventus have been busy during the transfer window, with the likes of Miralem Pjanic, Medhi Benatia and Dani Alves all signing on for Massimiliano Allegri's men.