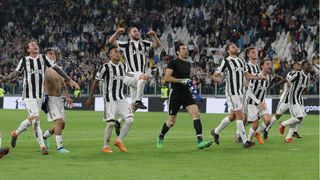 Massimiliano Allegri's men got the point required with a goalless stalemate against Roma at the Stadio Olimpico on Sunday, just four days after overcoming AC Milan in the Coppa Italia final on the same ground.

Defeat to Fiorentina and a 2-2 draw against Torino since beating Juve meant it became clear the tank had run dry for Maurizio Sarri and his players on their brave bid for Serie A glory.

But the thrilling football turned out by Sarri's swashbuckling outfit has undoubtedly proved a defining feature in a memorable season for one of Europe's grandest leagues.

Elsewhere across the continent, processions have been the order of the day. Juventus, Napoli and a very decent supporting cast have given us something to savour. Here is how it all unfolded.

The opening months of the season were all about Napoli – the midfield craft of Jorginho, the drive of Marek Hamsik, the quicksilver forward play of Lorenzo Insigne and Jose Callejon and the insatiable goalscoring of Dries Mertens. Not for the first time in the Allegri era, some high-profile departures in the close season saw Juve collecting plenty of points but taking time to truly hit their stride.

When the teams met at a fervent Stadio San Paolo in December, Napoli were still undefeated and had the chance to pull seven points clear of Juve. But Gonzalo Higuain returned to torment his former club with the only goal after 12 minutes before the visitors closed out a 1-0 win. Napoli picked a terrible moment to underwhelm and the race was on.

Seen by many in his homeland as Lionel Messi's heir for the Argentina national team, Paulo Dybala has experienced a season of ups and downs. The Juventus forward's capacity to bring his lavish gifts to bare has been fitful but he produced the goods sensationally in a February showdown with Champions League aspirants Lazio.

Juve had lost to Simone Inzaghi's men in the Supercoppa Italiana and in Turin earlier in the campaign. Locked at 0-0 in the Stadio Olimpico, Dybala muscled his way into the box and clipped a shot sublimely into the top corner under pressure. Over to Napoli, who also had a capital engagement against Roma on the same day. Not for the last time this season, Eusebio Di Francesco's men blasted through a much-vaunted foe for a 4-2 victory. Sarri's men led early on through Insigne but Edin Dzeko's brace underpinned a result that saw Napoli's lead at the summit cut to a point having played a game more.

The Roma result sapped Napoli of their swagger and they were held to draws in three of their subsequent five matches. The title was slipping away, but that run also featured a spark of defiance. At home to Chievo they were 1-0 down in the 89th minute, only for Arkadiusz Milik to equalise. The scenes of pandemonium when Amadou Diawara crashed home a stoppage-time winner were something to behold.

Juventus, meanwhile, travelled to Crotone in April amid a fog of Champions League heartache and slipped up in a 1-1 draw. The door was ajar four days before the presumed title decider.

While Juventus showed the assured confidence of champions in the reverse fixture, their poise deserted them on home turf and Gianluigi Buffon was their saviour on three occasions. He could not manage it a fourth time as Kalidou Koulibaly powered home from a corner to give Napoli the sweetest of 1-0 victories in the final minute. Juventus looked spent and had the harder fixtures to come. The moment ultimately lasted briefly but, right then, it felt like Napoli's time.

RED CARDS, OWN GOALS AND A ROLE REVERSAL

A trip to Inter in the Derby D'Italia was far from ideal for Allegri's men after watching Napoli laud it on their own patch. Despite Douglas Costa giving them a 13th-minute lead and Inter's Matias Vecino being sent off shortly afterwards, Mauro Icardi's equaliser and an Andrea Barzagli own goal had Juve sleepwalking towards another damaging loss. But Milan Skriniar put through his own net to level the scores and Higuain stepped up when it mattered most.

If the sense of another momentum shift felt strong then it became overwhelming a day later in Florence when Koulibaly was sent off for an early professional foul on Giovanni Simeone. In the birthplace of the Renaissance, Napoli were unable to find another improbable leap forward and Fiorentina ran out 3-0 winners. The title was staying in Turin.