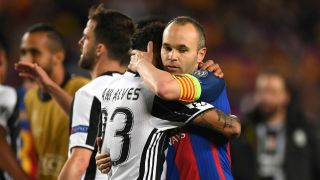 Serie A leaders Juve dispatched Monaco 4-1 on aggregate in their semi-final to reach the showpiece in Cardiff, having overcome Barca in the previous round.

Madrid, meanwhile, will take the defence of the trophy right to the final game after beating Atletico Madrid 4-2 across the two legs of their last-four encounter.

Iniesta, a four-time winner of the trophy, says his interest is minimal given that he will not be involved but accepts Juve and Madrid deserve their shot at glory.

"Madrid and Juve are just finalists for the Champions League, but you lose interest when you're not playing the final," he told a media event in Barcelona.

Iniesta was man-of-the-match when Barca beat Juve 3-1 to win the trophy in 2015 and holds the distinction of having assisted a goal in three finals.

However, the Spain international claims his stoppage-time goal against Chelsea in the semi-final of 2009 is his greatest moment in the competition.

"My best memory of the Champions League is the semi-final against Chelsea in 2009," he said.