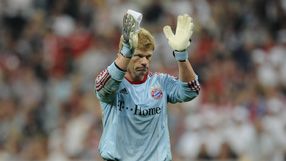 Dortmund, eight points clear of Bayern at the top of the Bundesliga, can wrap up their second successive league title on Saturday with two games to spare with a home win against fourth-placed Borussia Monchengladbach.

Kahn was particularly impressed by the way Dortmund defender Never Subotic ran up behind Arjen Robben and shouted at him after the Bayern's Dutch winger missed a late penalty in last week's match between the two sides, which Dortmund won 1-0.

"That is exactly the kind of mentality you need, it expresses the unlimited will to win," Kahn told Sport Bild magazine in an interview. "It says: 'I want to win the title at any price.'

"What is striking for me is the hunger for success and the huge identification that [coach] Jurgen Klopp and the team have with the club," Kahn added.

The 42-year-old also tipped Dortmund to beat Bayern for a fifth time in a row when the two meet again in the German Cup final at the end of the season.

"I have my doubts whether the Bayern players can deal with that defeat positively, and that they may lose a fifth game in a row," he said.

Kahn was involved in a number of memorable matches against Dortmund during his playing days, and the sight of the yellow and black team seemed to bring out the most aggressive in him.

The low point came when he aimed a flying kick at Dortmund forward Stephane Chapusiat, bit Heiko Herrlich on the neck and pulled Andreas Moller's ear during an action-packed match in 1999.

Kahn added that Dortmund's presence could benefit Bayern in the long term.

"Competition means that you are always being asked questions and that you will never be allowed to get sluggish or lazy," he said.

For the second season running, Dortmund's young team, orchestrated by their charismatic coach Klopp, have taken the Bundesliga by storm with their intense, non-stop, physical game.

The general consensus is that they have wanted the title more than arch-rivals Bavarians, whose eyes are fixed on the Champions League and the possibility of playing in the final in their own Allianz Arena stadium.

Dortmund, who looked upon the Champions League as a chance to gain international experience, finished bottom of their group, leaving them to concentrate on domestic football.

The 44-year-old is known for his exuberant celebrations and Germany is already braced for his performance on Saturday if, as expected, they wrap up the title.

Dortmund, who are playing in the evening game, may even have clinched the title before kick-off if Bayern fail to win their match away to Werder Bremen.

That match falls in between the two legs of their Champions League semi-final against Real Madrid, with Bayern having won the first leg 2-1 at home last Tuesday.

At the other end, hapless Kaiserslautern (20 points) will be relegated if they fail to beat Hertha Berlin (28) in a clash of the two bottom sides, or if Cologne pick