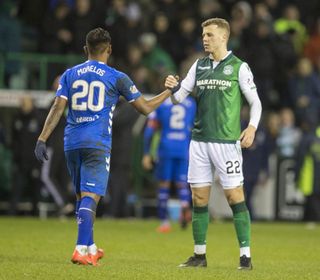 Rangers have completed the loan signing of Hibernian striker Florian Kamberi with midfielder Greg Docherty moving in the opposite direction.

Gers boss Steven Gerrard moved for the 24-year-old Swiss, who has eight goals this season, after losing Jermain Defoe to a calf injury for about five weeks. Kamberi and Docherty have moved on loan for the rest of the season.

Marc McNulty’s return to Hibernian paved the way for Kamberi to join Rangers.

McNulty rejoined the club on loan from Reading, with Hibs also signing full-back Paul McGinn from St Mirren for an undisclosed fee.

Celtic have had a quiet deadline day after manager Neil Lennon stated he was happy with his squad, although the Ladbrokes Premiership champions remained on the lookout.

Our second January signing is in before the deadline.— Motherwell FC (@MotherwellFC) January 31, 2020

Motherwell secured a replacement before Scott’s move was finalised when they brought in Newcastle winger Rolando Aarons on loan. The Jamaican had earlier been linked with Kilmarnock.

Aberdeen bought right-back Ronald Hernandez from Norwegian club Stabaek for an undisclosed fee. The 22-year-old has 15 caps for Venezuela.

Hearts completed the signing of 22-year-old midfielder Marcel Langer from Schalke until the end of the season but appear to have been frustrated in attempts to sign Barnsley forward Mamadou Thiam. Christophe Berra joined Dundee on loan after being frozen out.

"I can't wait to get out there and show everyone how determined I am to make up for lost time."— Kilmarnock FC (@KilmarnockFC) January 31, 2020

Kilmarnock re-signed Kirk Broadfoot from St Mirren for an undisclosed fee. Full-back Stephen O’Donnell earlier turned down a move to Oxford while Killie loaned Iain Wilson to Queen of the South.

Hamilton brought back winger David Templeton from Burton and rejected several bids for both Steve Davies and Mikael Miller, with Hibs foiled in offers for the latter.

Livingston recalled Dolly Menga midway through a season-long loan spell with a club in Angola.

Ross County co-manager Stuart Kettlewell told BBC Radio Scotland he had had a “pretty boring” deadline day but the Dingwall club did knock back an enquiry from a Sky Bet League One club for top goalscorer Ross Stewart.