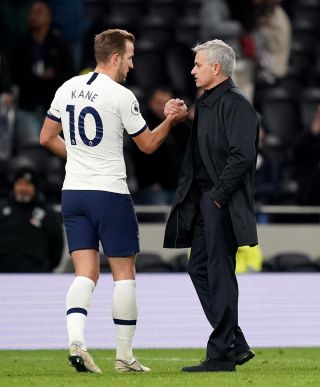 Former Tottenham striker Peter Crouch has told Harry Kane he does not need to leave to win trophies now Jose Mourinho is at the club.

Mourinho, who replaced Mauricio Pochettino at Spurs 10 days ago, wants to turn Kane into a winner, while the England captain has never hid his desire to win trophies.

It was looking increasingly likely he would have to move away from his boyhood club to do that as Tottenham suffered a hangover from their Champions League final loss last season.

Speculation was rife that the 26-year-old would move on in the summer, but the arrival of Mourinho changes things.

“He is a top, top player,” Crouch told the PA news agency. “I saw him coming through at Spurs when he was in the youth team and if you’d have told me what he would go on and achieve then, I wouldn’t have been sure at that time.

“But he has come on so much and he is relentless in his training and he has improved so much, he is a born goalscorer.

“He always scored goals, but he has worked so hard on his game and improved physically, he has got a great strike with both feet, he can drop deep, his range of passing – he is the complete centre forward for me.

“I don’t see why he would leave. People are saying he needs to win trophies.

“He is 26, he has got a winner as manager at that football club, he is captain there, an incredible stadium, an incredible training ground, he’s from the area.

“If he can win something at Tottenham, which he can do under Mourinho, it will mean more to him than winning somewhere else.”

Spurs have won three out of three games under Mourinho, scoring 10 goals in the process.

There are still issues to address at the back, but Crouch believes the Portuguese is “the right man at the right time” for them.

Did it the hard way but a great win and bring on the last 16 #COYS#UCLpic.twitter.com/C3ZdXTeYje— Harry Kane (@HKane) November 26, 2019

“Jose coming back, I don’t think we envisioned that for him to go to Spurs,” he added.

“But they look like a Mourinho team now. They have got fantastic attacking flair and they have got the right blend.

“He could be the right man at the right time for Spurs.

“He has been happy and he looks a bit different. He looks like he has his smile back on his face, he looks similar to the Jose we saw when he first came to Chelsea.

“It is a breath of fresh air and hopefully it will continue and that will be good news for Spurs.”

Crouch, who began his career at Tottenham and then represented them between 2009 and 2011, is in the first few months of his retirement.

The 38-year-old has moved into punditry and will be part of Amazon Prime Video’s coverage of the Premier League this month.

The streaming service will show all of the forthcoming midweek matches – including Mourinho’s return to Manchester United and the Merseyside derby – along with a Boxing Day marathon.

Crouch could not hide his disappointment at the fact he is no longer playing, but thinks this is the next best thing.

“It’s exciting to be part of Amazon,” he said. “When I stepped out of the game I wanted to stay in football, it is great to be around the live games, the buzz of being at the games.

“Talking about football is not playing, but it is something I am enjoying.”

:: Peter Crouch will be working on Amazon Prime Video’s Premier League fixtures, which includes 20 matches across the first midweek fixture round in December and all matches during the Boxing Day round. A Prime membership is available for just £7.99 a month, or £79 for the year. For more information, visit: www.amazon.co.uk/premierleague