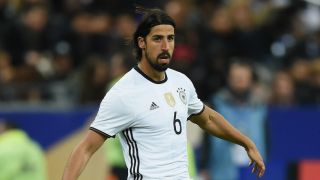 Sami Khedira says Germany have "no chance" of winning Euro 2016 on current form, but believes his side will come good by the time the tournament gets underway.

Germany are favourites to clinch the European Championship in France later this year having triumphed at the World Cup in Brazil in 2014.

However, their form in qualifying was mixed at times, including defeats to Poland and Republic of Ireland, while Scotland and Georgia pushed them hard in the latter stages.

Juventus midfielder Khedira is confident Germany will be among the contenders at the Euros but warned they will have to step it up a notch to add to their trophy haul.

"If we are honest, we would have no chance in our current form," he told Die Welt. "Our performances in the past few months were not good enough.

"I think that's something all of us realise. Everyone knows that we all have to step up a gear if we want to play for the title at the European Championship.

"We have to be a close unit on and off the pitch. If we succeed then I'm totally convinced we'll be hard to beat, then we will be in contention for the title definitely."

Khedira added: "Germany is always one of the favourites. The only thing that has changed is that we go there as reigning world champions.

"The attention and the pressure will be even greater. But we have shown that we can deal with the pressure.

"What people need to be aware of is that teams who are already motivated against Germany on the battlefield will be even more committed. After all what could be nicer than to beat the world champion? That is something each of us must keep in mind."