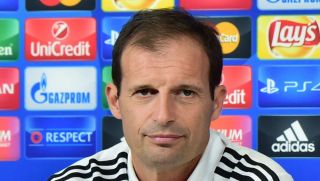 The 28-year old suffered a thigh strain during August's pre-season friendly with Marseille, but is back among the first-team squad, leaving coach Massimiliano Allegri in no doubt that the former Real Madrid star is ready to play his part.

"Khedira will play," Allegri said. "Starting or on the bench? You'll have to wait and see. He's ready."

Despite initially refusing to confirm any details, Allegri later named "10 of my starting 11", which included the German, whose return to fitness will come as a significant boost to the Italians after a difficult run that has seen them pick up just one league win and fall 10 points off the top of Serie A.

Having beaten Manchester City 2-1 in their previous Champions League encounter, the Juve boss insists he is once again preparing his side for a tough contest against the current Europa League holders, who, despite having recorded only one La Liga triumph themselves, swept aside Borussia Monchengladbach 3-0 last time out.

"[The] game is almost a decisive one for our hopes of reaching the knockout stages," the 48-year-old added.

"We need to show a great deal of determination in our display.

"It will be an evenly poised game, we need to show plenty of focus and desire."

The Italian champions will be without Swiss defender Stephan Lichsteiner, who has been forced to undergo further tests with a cardiology specialist after sitting out the defeat to Lazio complaining of breathing problems.

"It's a pity that Lichsteiner is out," Allegri added. "He's been left out as a precaution, his health is the most important thing."

"Andrea Barzagli will play in defence."

Martin Caceres is also ruled out after being suspended by the club over allegations of drink-driving following a crash involving his Ferrari on Monday.