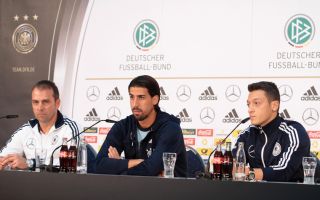 Joachim Low's men hold a five-point lead at the top of UEFA Group C and can guarantee a place at Brazil 2014 by beating Ireland in Cologne.

Yet while Khedira has fond memories of that encounter, he does not expect Ireland to roll over at the Rhein Energie Stadium.

"There are very positive memories for sure. We won clearly, but this only happened because we were focused straight from the beginning and took it seriously," said the Real Madrid midfielder.

"That's how we have to approach it again. The Irish aren't easy to play; they are physically very strong and fight hard for 90 minutes.

"They want payback for the first game. They don’t have anything to lose, so we have to show the same passion and power again in order to have another great game."

Khedira is likely to start in midfield alongside Bayern Munich's Bastian Schweinsteiger and had words of praise for his colleague.

"Bastian has proved that he has great character and can be an outstanding player," Khedira added.

"It is fun to play next to him. I appreciate him."

Another member of the German midfield, Mesut Ozil, is set to gain his 50th cap.

"I'm happy to be a part of the team and proud to have played so many games," said the Arsenal midfielder.

"I am grateful for the manager who trusts me. The game (on Friday), obviously we want to win and qualify and we are well prepared."