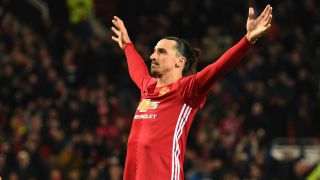 RB Leipzig's Emil Forsberg has revealed how former Sweden team-mate Zlatan Ibrahimovic regularly got under his skin during their time together with the national team, but was quick to add how much he admires the Manchester United man.

Forsberg made his Sweden debut in 2014 and featured alongside Ibrahimovic until the latter retired from international football after Euro 2016.

"When you have had a bad training session, he keeps on approaching you and bothers you with questions why you trained so badly, how it is even possible to train that badly and why you were not focused. Some of it is joking around and some of it is serious.

"But that's the way he is, he always wants to win and pushes those around him to new heights.

"He is not playing some sort of character, he simply is the way he is. He really is the king in Sweden, that is not an exaggeration. Nobody can even compare to Zlatan. He can get away with anything he says, but there is no-one else like that. He has created this situation himself with his consistently strong performances.

"Zlatan always was my role model when I was a child. It is incredibly cool to have played with him and it is a pity that he retired from international football."

Ibrahimovic is recovering from the knee injury he suffered in Manchester United's Europa League win over Anderlecht.