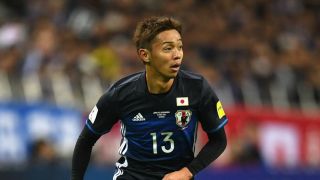 Hiroshi Kiyotake's frustrating six months at Sevilla has come to an end after he agreed a return to Japan with former club Cerezo Osaka.

Kiyotake impressed in the Bundesliga with Nuremburg and Hannover since arriving in Europe in 2012, but when the latter were relegated last season he completed a switch to LaLiga for a reported €6.5million fee.

However, the 27-year-old has not been able to hold down a regular starting spot under Jorge Sampaoli, however, and only made nine appearances in all competitions.

The attacking midfielder scored just once in that time and Kiyotake has opted to return to the J-League with Cerezo - a club he made 84 appearances for before moving to Germany, scoring 19 goals.

He joins a Cerezo side preparing for a top-flight return after winning promotion from the second tier last season through the play-offs, beating Fagiano Okayama 1-0 in the final.

Kiyotake had been linked with a move to MLS with Seattle Sounders, while Sagan Tosu and Vissel Kobe were also said to be vying for his signature before Cerezo pounced.