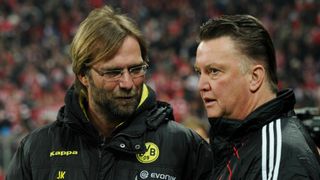 The Reds meet their fierce rivals at Anfield on Sunday in a crucial Premier League fixture, but the former Borussia Dortmund boss was complimentary about a present and former foe.

Klopp was pleased to hear Ferguson had praised his ability and spoken of his worry at how his presence could challenge United.

The Anfield boss responded: "That is good, but now I have to prove it!

"I had really good moments with Sir Alex. I needed 10 minutes to understand his language, but then it was OK! For a manager best thing you can do is sit there and listen to him. It was an honour to talk with him.

"Maybe he is the greatest ever - the John Lennon of football."

Meanwhile, Klopp backed Van Gaal, who has been criticised for his team's playing style, by paying tribute to his track record, despite the pair's vastly different styles and past battles when they were at Dortmund and Bayern Munich.

"Louis van Gaal is one of the most successful managers in the world, he has won a lot of titles and has a special idea of football," said the Liverpool boss.

"As an opponent you have to respect this and work with the information. Newcastle was a special game, they did really well. United reacted good in this game.

"We are different characters. He is more experienced. I don't know Louis too well but we have had a few intensive games. We both want to be successful.

"I won't say we have got a better idea. It is not about possession or counter-pressing. We are different characters. I might be a bit more lively on the sidelines but sometimes that is not always good."