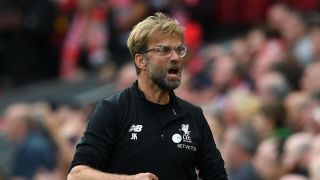 Jurgen Klopp feels Barcelona or any other team in world football would fail to create a glut of chances against Jose Mourinho's defensively minded Manchester United.

United left Anfield with a 0-0 draw on Saturday after spending long periods of the match on the back foot against a Liverpool side who have now won only once in eight outings across all competitions.

Aside from Joel Matip drawing a magnificent first-half save from David de Gea, Liverpool struggled for clear-cut chances, but Klopp was able to take heart from dominating a side his own remain seven points behind in the Premier League.

"You cannot expect that we create 20 chances against Manchester United. It's simply not possible. Barcelona, on their best day would not do it," he told a post-match news conference.

"We will see – United will not lose a lot of games in this season.

"If people think we should have done more offensively, that takes too long to explain football, to start at that point. I cannot think about this.

"Expectations, I can deal with this. We have the biggest expectations. The season is not over.

"The main thing you have to do in a season is to develop and to perform. That's what we've done and so far we did not get enough for it.

"You can blame us because we are not responsible for taking the chances. But we created chances again and in each game we could have won - even against Man City [a game Liverpool lost 5-0], I know it sounds crazy."

37 - Since Jurgen Klopp took charge, Liverpool have won the most points in matches between the “big six” in the . Bragging. October 14, 2017

Klopp's side have been criticised for some limp defensive performances this season but he insisted United's limited encouragement on Merseyside was not simply down to Mourinho's approach.

"I'm happy about the consistency of performance," he said. "We have to develop again but from the last game to today we improved a lot in protecting our own offensive situations.

"Newcastle did not have a lot of counter-attacks [in a 1-1 draw before the international break] but even they had more than United because we did better in these situations.

"We took their key players in counter-attacks out of the game and were still able to create."

Having told television reporters that "I'm not sure we could do this at Liverpool" in reference to Mourinho's tactics, Klopp was a picture of diplomacy when faced with a similar question at his media briefing.

"Oh, that's a nice question," he chuckled. "If I say 'no' you think I don’t want to win something and if I say 'yes' people are already afraid. So, no comment."