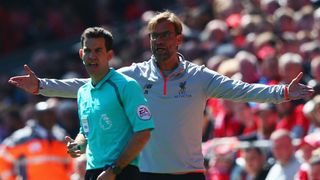 Liverpool boss Jurgen Klopp feels there were other factors at play aside from James Milner's saved penalty after Southampton left Anfield with a 0-0 draw.

The hosts were frustrated by a deep-lying and well-manned Southampton defence but looked set to grab the breakthrough when Jack Stephens was penalised for handball inside the box after 64 minutes.

But Milner's usual reliability deserted him as he could not quite pick out the bottom left corner and Saints goalkeeper Fraser Forster saved brilliantly.

Former England international Milner last failed from the spot in the Premier League in November 2009 and had netted seven from seven this term.

The experienced player shouldered responsibility for a setback that left Liverpool's Champions League qualification prospects out of their hands during a post-match interview but Klopp refused to be so harsh.

"He should not blame himself - that is football," he told Sky Sports.

"Him scoring would have helped of course but that is not the only decisive thing."

Indeed, Klopp and his men were frustrated by opponents playing with limited ambition.

"I thought it was good enough to win," he said of Liverpool's performance. "I thought Southampton played really unlike how they normally do.

"I'm fine with our defending over 90 minutes because they didn't really create anything.

"To play against 10 deep defending Southampton players is very difficult. We had our moments. We could have scored, that would have opened them up a bit.

"It is a point more, it doesn't feel like it at this moment, but it is."

Klopp added: "It is not finished yet. We all have to play our games.

"We go to West Ham, will try to win and that's all we can do. We try everything and we do not stop."