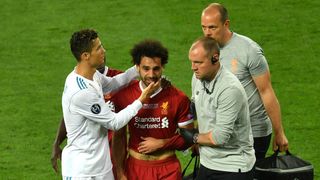 Liverpool manager Jurgen Klopp has confirmed Mohamed Salah is a major doubt for Egypt's World Cup campaign after injuring his shoulder in the Champions League final.

The forward was forced off 30 minutes into Saturday's clash in Kiev after falling awkwardly under a challenge from Real Madrid captain Sergio Ramos.

Salah tried to continue after treatment but left the pitch in tears, with Adam Lallana replacing him for the remainder of Liverpool's 3-1 defeat in Kiev.

Klopp confirmed to Sky in Germany that Salah had "probably" suffered a fracture and later admitted his chances of going to Russia were in jeopardy.

"Yeah, it is," he told BT Sport when asked if Salah's World Cup hopes were at risk.

"There is something with the shoulder. You can imagine he would have played on if anything was possible."

"I think it's either the collarbone or the shoulder itself. It doesn't look good, that's it.

The news compounded a miserable 90 minutes in Ukraine for Liverpool, who were beaten by two goals from Gareth Bale after Sadio Mane cancelled out Karim Benzema's opener.

Egypt face Uruguay, Saudi Arabia and hosts Russia in Group A of the World Cup.