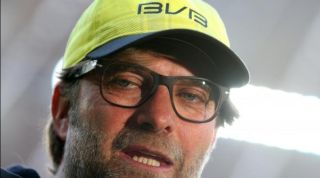 The German has been heavily linked with a move to Old Trafford following David Moyes' departure earlier this week, but Klopp has reiterated that he is committed to Dortmund.

During his five-year tenure at the Signal Iduna Park, Klopp has guided Dortmund to two league titles, DFB Pokal glory and the club were also beaten finalists in the UEFA Champions League last season.

United's search for a new manager began after Moyes was sacked on Tuesday, but Klopp has again stated that he is happy in Germany and stressed that he has had no contact with the Premier League champions.

"I think Man U is great, but I am still really happy here because there are around 1,000 reasons why I really like working at this club," he said on Thursday.

"Therefore, it cannot have anything to do with the greatness of a team, even if there were to be an offer.

"And to react to this is a bit uncomfortable when there has not been an offer, so to reject it before an offer comes is personally embarrassing for me."