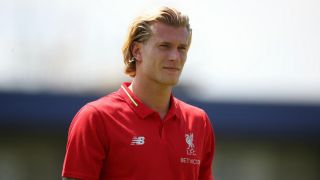 Jurgen Klopp talked down another error from Loris Karius after Liverpool's 3-2 friendly win over Tranmere Rovers, but accepts his goalkeeper will be scrutinised ahead of the new season.

The German goalkeeper replaced Danny Ward at half-time after the Reds raced into a three-goal lead with strikes from Adam Lallana, and youngsters Rafael Camacho and Sheyi Ojo.

Karius, 25, was making his second appearance for Liverpool since his high-profile errors against Real Madrid in May's Champions League final, but Klopp defended his goalkeeper after he spilled a free-kick and Rovers scored from the loose ball.

"It [criticism] will probably happen for a while until he has a few fantastic games, that is how the situation is," he said.

"We cannot change that. Our job is to perform and you do what you do and that is part of the deal.

"Loris concedes that goal, but we cannot start a story always after each mistake. Mistakes will happen; I don't like it, he doesn't like it, but it will happen, so let's carry on and make the best of all these situations by learning from them."