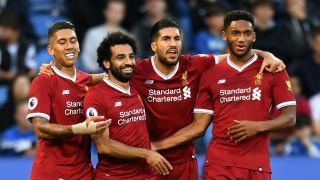 Jurgen Klopp emphasised the need for Liverpool to focus on results and ignore any pressure to provide a spectacle, insisting: "We are not the Harlem Globetrotters".

The Reds were involved in another entertaining encounter on Saturday as they overcame Leicester City 3-2 in the Premier League.

Philippe Coutinho set up Mohamed Salah for the opener and scored a fine free-kick, while Jordan Henderson was also on target, but the hosts could have snatched a point had Jamie Vardy not seen his late penalty saved by Simon Mignolet.

The result ended a four-match winless streak for Klopp's side and the German spoke afterwards about the supposed pressure that had been building on the back of that run.

"I know about pressure a lot – I actually had it all my life because of different reasons," he said.

"Pressure when it is the right pressure, it always helps. When it is without sense then it doesn't help – and I'm very good at ignoring it.

"But, you can imagine, we want to be successful. We know the quality we have makes us responsible for being successful. I know that.

"But I said to the boys before the game that we are not the Harlem Globetrotters. We don't go out and try to play really good football, we are here for results and so we play for results.

7 - No player has been involved in more goals in all competitions this season than Mo Salah (6 goals, 1 assist). Bright.September 23, 2017

"I loved how we fought for it. It could have been clearer but, after a few games with no results, or not the right results, you have to fight back.

"That's what we did and now we can build on this."

Next up for Liverpool is Tuesday's trip to Spartak Moscow in the Champions League, having drawn their Group E opener 2-2 against Sevilla.