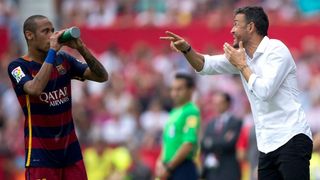 Barcelona coach Luis Enrique says Neymar is set to start the top-of-the-table clash with Atletico Madrid on Saturday despite suffering a minor foot injury on Wednesday.

The Brazilian was on the receiving end of some physical treatment from Athletic Bilbao as Barca moved into the Copa del Rey semi-finals with a 3-1 second leg victory at Camp Nou.

In the process of scoring Barca's third, Neymar received a kick from Mikel San Jose that prompted fears of an absence from the leaders' home match against second-placed Atleti in La Liga.

But when it was suggested to Luis Enrique that a rest for the 23-year-old may be prudent, the Barca boss said: "He has a knock on his foot but it would probably be less prudent to not put him in, that would be imprudent.

"He won't sit out because of a little knock. Was that clear enough? If he doesn't play, it wont be because of a knock."

Wednesday's victory was Barca's seventh in a row in all competitions, although - as in the league win over Malaga last week - the champions were on the back foot for long spells.

With their treble defence still on, Luis Enrique dismissed suggestions his side were beginning to wane physically.

"We haven't been playing well but like in the last game, it was about the pressure Athletic put on us. It's more because of what others have done in games than us," he added.

"If you look at the second half of those games, we played a different game. Physically we are good. I see us at the same level as this time last year.

"Regardless of who has played more or less, we're doing fine for this stage of the season.

"Physically, Atletico are strong, very good and to beat them we'll need to repeat the same situation as last year.

"We'll need to be reliable in defence and attack, create chances and avoid them having set-pieces - that's what we'll have to do to win."